Heritage Malta: The church of St. Paul the hermit 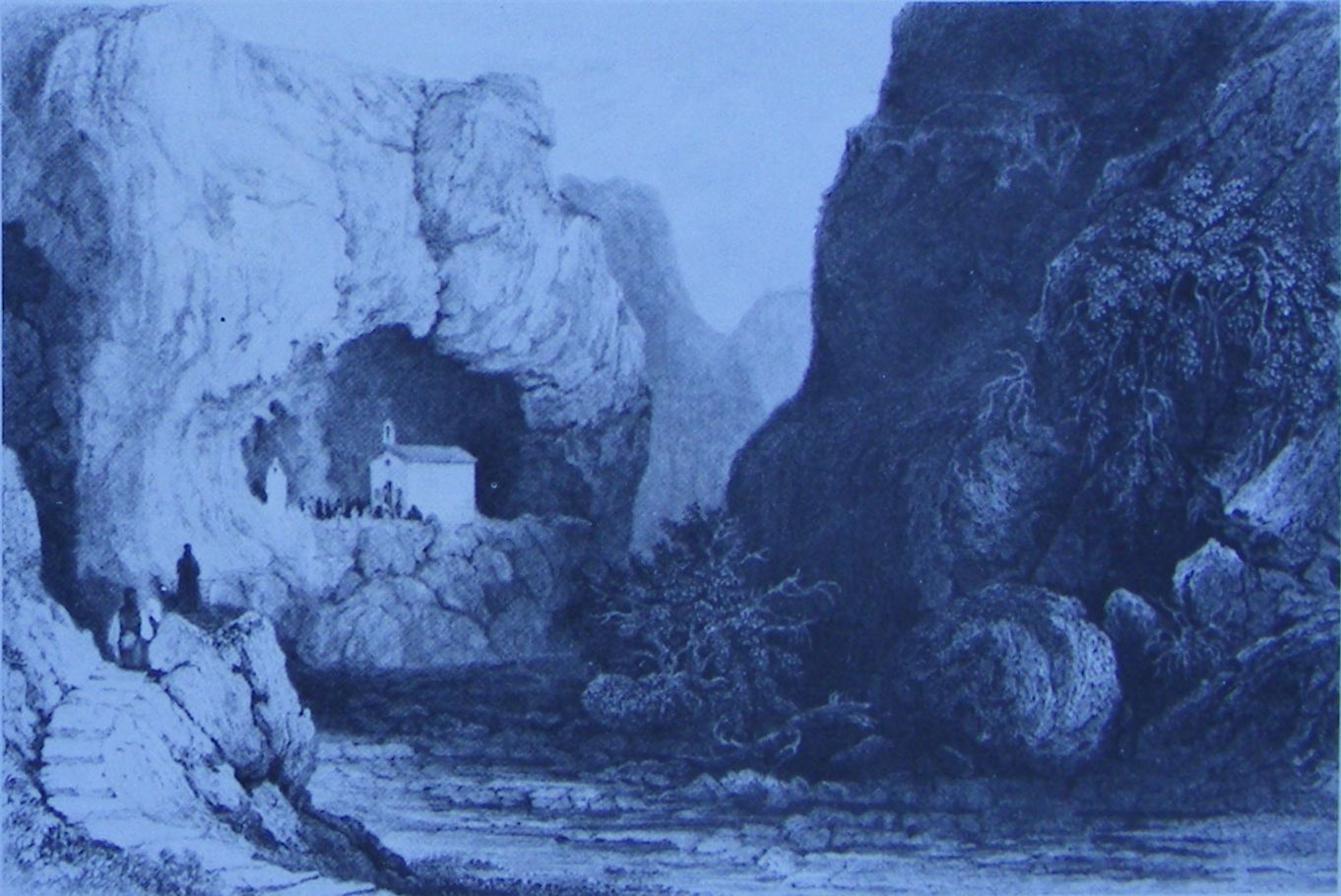 A 19th century British engraving showing the Church of St. Paul the Hermit.

(p.141) Built in the shadow of an overhanging ledge of rock and difficult of access, St. Paul the Hermit at Wied il-Ghasel near Mosta is one of the most picturesque wayside churches in Malta. Years of neglect and destruction by vandals have unfortunately reduced it to a poor state and unless proper action is immediately taken it may soon become a complete loss.


Stylistically it appears that the church was built in the 17th century on the site of an older one of unknown date. It was restored and slightly modified either in the late 19th or in the early 20th century. Externally the church which is correctly orientated on an east-west axis is almost a plain cube. The simple but pleasantly proportioned west-front has a plain rectangular doorway flanked on either side by the usual rectangular windows with characteristic iron bars. Above it is a detached canopy with simple mouldings surmounted by a small square band of projecting masonry and a deep eye framed in a plain stone circle. The shallow-pitched gable is emphasised by a cornice built up of several mouldings which runs along the south wall as well. On the apex of the gable rests a charming little bell-cot topped by a cross on a stone ball. Besides the west door there is another doorway in the south wall; since the late Middle Ages, churches have had typical doorways on the sides as well as on the west-front. 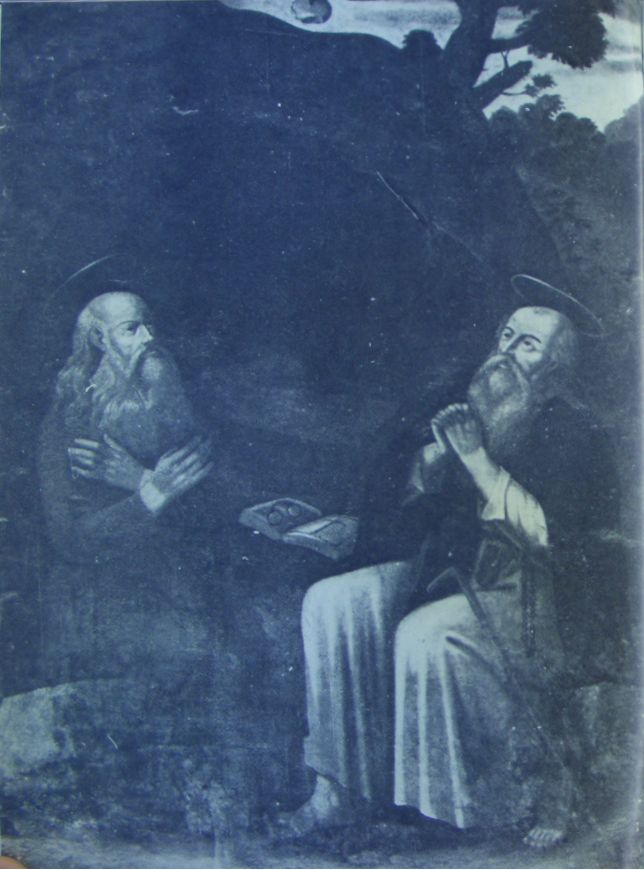 Main altar piece of the church of St. Paul the Hermit showing St. Anthony the Abbot and St. Paul in prayer. This painting has been extensively damaged. Note the pince-nez (speci ta' nuccali tal-antik) on the book. 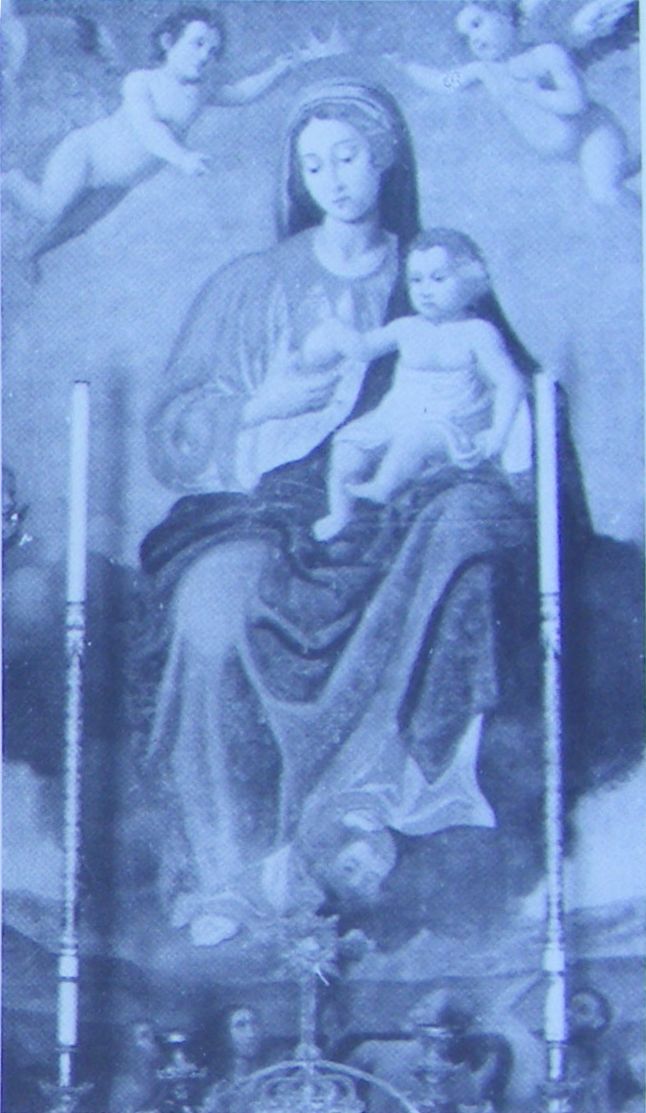 Altar painting in the chapel of the Holy Virgin.

Inside, the church consists of a rectangular nave, 9.45 m long by 4.47 m broad, roofed by a barrel vault with five ribs springing from a high ledge.


(p.143) In the fourth bay on the north wall is an arched opening to a small 1656 chapel of the Virgin which is almost entirely rock-cut and to a small vestry beyond. There are two altars, one in the chancel and another in the chapel of the Virgin. The latter altar made of marble, was donated in 1921 by Dun Karm Gauci to replace an older one, erected in 1656 by Giovanni Mangion, a benefactor of the chapel. Dun Karm Gauci is commemorated by a marble plaque in the nave.


Up to 1967 both altars had altarpieces. The one in the chancel was a provincial but interesting mid 17th century painting presumably by a Maltese artist. It showed St. Paul the Hermit and St. Anthony the Abbot in prayer against a dark background of uncouth rocks and wild trees while a raven with a loaf of bread in its beak descends on them from the sky. A charmingly humane note was provided by the pince-nez used as a book mark on the open illuminated prayer book between the two saints. The other painting was in the style of Alessio Erardi. It showed the Virgin and Child enthroned on clouds with angels and beneath, souls in Purgatory. On top two angels placed a crown on the Virgin's head.


There are two hardstone basins, one in the Chapel of the Virgin and a smaller one outside the west-front of the church. Both were intended to receive water dripping from the overhanging rocks which was formerly held in high regard because of presumed medicinal properties. Several Grand Masters used to have their tables supplied with it. An 18th century lithograph by Ph. Benucci shows a third basin on a stone pillar outside the church.

Statues of St. John the Baptist and St. Anthony the Abbot in the precincts of the church. That of St. Paul the Hermit between them has been destroyed by vandals.

Near the church is a plinth which originally carried three small limestone statues each about 95 cm high, of St. John the Baptist. St. Paul the Hermit and St. Anthony the Abbot: they have all fallen victims to vandalism. The statues were the gift of Fra Wolfgang Philip Guttenberg. Up to a few years ago one could still make out the following inscription on the pedestal of the statue of Anthony the Abbot: B. de Guttenberg S.J. Co. Baiulius Brandenburgensis 1705. E. B. Vella in his Storja tal-Mosta mentions another statue of St. Paul the Hermit of which no trace remains and which was erected in 1646 by Filippo Cassar.


The precincts of the church are enclosed by the remains of an iron railing apparently put up in the early 20th century. It does not appear in the several 19th-century prints and drawings of the church such as Michele Bellanti's water-colour at the Fine Arts Museum in Valletta. They show instead, a low stone wall enclosing a small rectangular space or zuntier outside the west front.


(p.144) The first documentary evidence of a church of St. Paul the Hermit at Wied il-Ghasel is contained in the report of the Apostolic Visitation of Mgr. Pietro Dusina. It featured in a list of churches in the northern part of the island, which were not described individually but discussed as a group. Nothing was said about their appearance but some of them, including possibly that of St. Paul the Hermit, must have been cave-churches with rubble-walls closing part of the entrance. Mass was sometimes celebrated in them but Dusina deconsecrated them until they were provided with wooden doors.


The first description of the church is found in Gian Francesco Abela's Della Descrittione di Malta published in 1646. The church was built beneath overhanging rocks very much as it still is today. In the chancel behind the altar were murals of St. Paul the Hermit, the Virgin and Child and St. Anthony the Abbot. At the back of the church one could still see the vestiges of a rock-cut room which Abela believed to be the cell of a holy hermit though it might just as well have been the original church listed by Dusina. Shortly after Abela wrote his description the church was apparently either rebuilt or extensively modernized as we see it today.


In the 17th and 18th century mass was said in the church on several occasions throughout the year and the feast of St. Paul the Hermit was observed with considerable ceremony. After the plague of 1675. Dun Ortensio Bennini, maestro di Capella of the Conventual Church of St. John started celebrating the feast with high mass and panegyric. 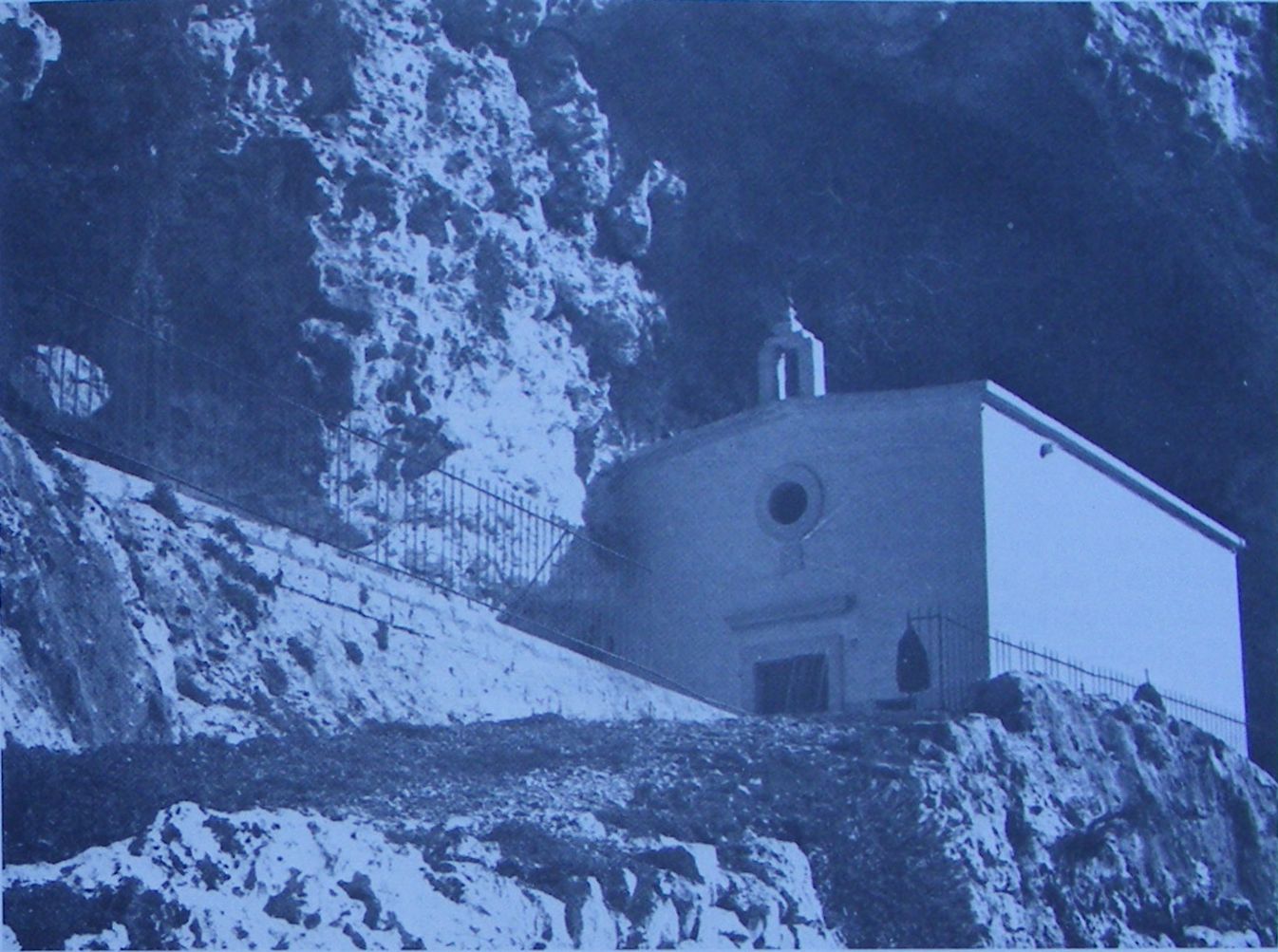 Church of St. Paul the Hermit from across the valley.

According to a tradition narrated by Abela, anchorites have on various occasions dwelt in the neighbourhood of the church. One of them, a saintly man, rebuked some shepherds for their licentious lives. To get rid of him they thought of a subtle plan. A girl of loose morals who did her washing in a nearby spring was to pretend to drop some clothes and call for help. If the hermit refused to help her he would be accused of lack of charity; if he went to her aid he would be charged with indecent behaviour. Unaware of the trap the hermit hastened to the girl's aid when he heard her calls for help, whereupon the shepherds rushed upon him hurling insults and pelting him with stones. He fled but they followed him to the seashore. When, they caught up with him he spread his mantle on the water and stepping on it disappeared from their sight leaving his walking stick behind. Amazed and repentant of their wicked deed, the shepherds built a church to (p.145) Paul the Hermit in the holy man'scave. Here the walking stick was venerated as a holy relic and every year on St. Paul's day it brought out flowers to the amazement of the congregation. The hermit never again returned to his hermitage and Wied il-Ghasel (the Valley of Honey), once renowned for the fine quality of its honey, was even forsaken by the bees which formerly abounded.


There are several legends about the adventures of the hermit after he left Wied il-Ghasel. According to one he was carried on his miraculous mantle first to Comino and then to Gozo where he lived in the precincts of the church of the Virgin at Qala where he is said to be buried. He is also sometimes identified with the Blessed Corrado of Noto. At Noto the pious belief that he crossed over from Malta to Sicily on his mantle is perpetuated in a verse from the litany which was recited every Friday in front of his shrine: SANCTE CORRADE, QUI DE MELITA IN SICILIANI SICCO VESTIGIO PERTRANSISTI - ORA PRO NOBIS (St. Corrado who from Malta crossed to Sicily without wetting your feet - pray for us).